Showing posts from December 5, 2012
Show all

Athletes and Domestic Violence: Why I started with the NFL first 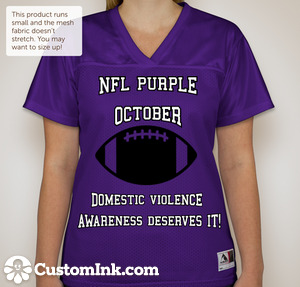 Many of you might remember me writing a post about why I started the NFL Domestic Violence petition . Well, this time I am going to talk about athletes and domestic violence and eventually will elaborate again on why I chose to start with the NFL. Notice that I said start with, so that means I am open to petition other sports organizations but I chose to start with the NFL. Now, the NFL is the number ONE sport in the United States and ranks number 10 in the world. Now that is huge. There are so many people who enjoy and love the sport of football. Now, yes every sport has players that have been involved in domestic violence incidents. In recent news, we have heard about soccer player Hope Solo and her husband Jerramy Stevens  (Former NFL Player), we have heard about Dez Bryant and Chad Johnson ( Formally known as Ocho Cinco) but I cannot help but to point out the fact that majority of the time when you hear about domestic violence as it pertains to athletes, it comes more fro
1 comment
Read more
More posts